We have released a new version of the AIT Voting Extension. The new version comes with new features as well as with some bugfixes which we are going to explain in this blog post. Besides the functionality improvements we changed the hosting of the extension from Azure to hosting it directly in Azure DevOps. Further we did a lot of clean-up operations in the backend which makes it easier for us to add new features in the future.

The admin page to create and administer the settings of a voting got a little redesign. It not only comes with a fresh look but also with the new possibility to configure the amount of votes for a voting. On top of that voting settings can now be changed during an ongoing voting without having to stop it (cf. Figure 1 (1)). When using this feature please be aware that in some cases your votes and thus the current voting results are resetted. This is done when the voting level or the number of allowed votes is changed.

Last but not least the admin page lets you now pause a running voting (cf. Figure 1 (2)). So did you ever want to stop people from voting but still see the voting result? Now you can! Just pause the voting and resume it later, if you want to let people continue to vote. 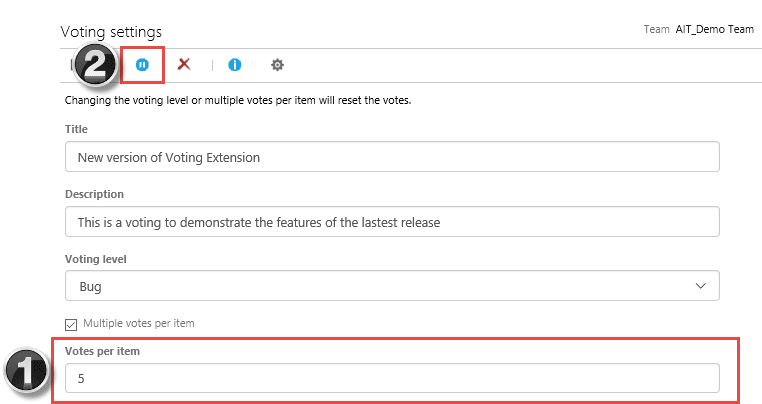 Six months ago we made the AIT Voting Extension available as OpenSource on GitHub. A good time to thank all contributors that are engaged in pushing the extension forward!