WordToTFS v6.3 is now available. This is a minor update with small improvements and a new WordToTFS template. There are still some steps to go for being well prepared for Azure DevOps Server 2019, but this depends on the availability of some libraries that will be finally released with Visual Studio 2019 by Microsoft. At this point in time, we will release 7.0. But there are some improvements that should not wait any longer.

The users already working with WordToTFS know that it supports various process templates / processes. Hence, it is fully configurable which fields are user by Word and how. Nevertheless, the field configuration did not support the full functionality of the DateTime formatter, which is described on Microsoft Docs. In the past it was possible to manually define a DateTime format as shown in the following example:

The outcome of this configuration is shown in Figure 2.

A smarter way to define the DateTime format is to use a predefined format specifier, as listed on Microsoft Docs. Samples are:

In addition to this functionality we modified the installer. In the former version we detected an issue that the installer downloaded unneeded packages, even heavy ones like .NET Framework 3.5.1. This was due to an issue in dependency management. With version 6.3 this has been fixed. 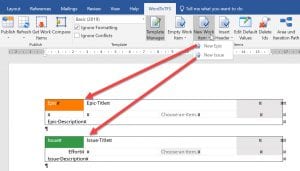 According to current planning this is the last update of major version 6 of WordToTFS. As soon as Visual Studio 2019 is released, we change the underlying dependencies and fully integrate Azure DevOps Server 2019 in our test environment.

If you have not installed WordToTFS already, download the software for free here. Otherwise you can simply click the Update button in the WordToTFS ribbon or wait some days until the automatic update mechanism installs it automatically.