Today we shipped an update for WordToTFS. The release number 6.2 mainly contains bugfixes, which are explained in the following. Please find the current version free for download here.

The most important fix is regarding image size. When a user adds a large image into the description field of a work item (or any other HTML-backed field), the image size might be reduced to show the image within the table field. This is a built-in functionality of MS Word and depends on the way how a user inserts an image (copy-paste; drag-drop; insert image; …).

However, the image should be stored as a work item attachment in its original size to avoid any quality loss. The bug we fixed in this release caused the image to be attached to the work item in reduced size, which ended up in some image quality issues. In this release, the image attached to the work item, has the original size, even if it is downscaled in the form to fit into the boundaries of the field (see the notification in the following screenshot). 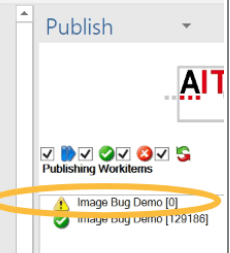 Beside this major issue, we did some minor UI fixes. The tooltip message that a work item query result contains unsupported work item types, contained a “\n” character instead of a real line break. Furthermore, the Test Specification Report pane could not be scrolled in case of some screen resolutions.

Test Cases showed up “<br>”-tags as literal strings instead of a real line break (see next screenshot).

We fixed the default templates we ship with WordToTFS to interpret the “<br>”-tags as desired. Additionally, we fixed a spacing issue in the default WordToTFS templates for Test Reports. There was no space after test run data so that the following test case table was directly added subsequently to the test run data.

Furthermore, we fixed test result reports with WordToTFS. They could not be generated due to some API issues.

There is still an issue regarding images in VSTS. It seems like a former API change in VSTS causes some trouble. We’re working on this issue together with the VSTS team. Hence, I expect a further update in the near future. Nevertheless, this issue only occurs when publishing work items with images to VSTS. For users that are using TFS, the issue does not occur.

How to get the new version

You can get the new version either via the automatic update procedure, by manually clicking the update button in the WordToTFS ribbon. For those of you that have not already installed a version of WordToTFS, you can get the latest version simply by downloading and installing from our website.