Today we’re happy to announce public availability of two releases of our TFS extension WordToTFS that makes collaboration between Office users and more TFS-addicted ones much easier. Actually this post comes a bit late since the release is already available some time. However, at the beginning we would like to answer the obvious question first: Why two releases at the same time and which one do I need?

Basically the answer is just as simple as logical. Since Microsoft recently released TFS 2015 as well as Visual Studio 2015, we followed that development and made WordToTFS 5.0 working on the technical basis of Visual Studio 2015. This means that WordToTFS 4.6 has the same prerequisites than all former 4.x versions. Basically either Team Explorer 2013 or Visual Studio 2013 is necessary to connect to TFS.

So, if you are running at least TFS 2015, WordToTFS 5.0 is the best choice. However, we also tested WordToTFS 5.0 with TFS 2013 Update 5. The features of WordToTFS 4.6 and 5.0 that are explained in the subsequent sections are identical. This means that both versions are only different in terms of their dependencies to Visual Studio.

We have different classes of features in this new release. The first group is targeting work with work items while the second one focuses on test reporting. After that we explain further small improvements and some of the bugfixes within this release.

Sometimes there are good reasons for getting work items from different team projects into your document. Since this scenario was not covered in former versions, WordToTFS now can handle those work items. A common scenario is that you have some work items, e.g. Requirements or in a more general term Product Backlog Items, which have links that you want to show in the Word document. These linked work items might contain some meta data and for that reason they are stored in a separate team project. WordToTFS now loads these linked items and shows the configured attributes within the actual work item that is part of your document.

Link mappings now have increased filter options. While you already could filter by link type it is now possible to additionally filter by work item type. The following screenshot shows a sample configuration for that.

Test Specifications and Test Reports went a step further into the direction of generating a title page with access to work item attributes. Since Test Plan became a work item some TFS versions ago, you might want to access attributes you have added to that work item type. Now you can access these properties from WordToTFS as shown in the following screenshot of the configuration file.

You can find more information in the user documentation on page 42 and 43, section “Templates”.

The query result in case of a Test Spec Report by Query now can also contain Shared Steps work items. As long as Shared Steps are configured in the w2t-configuration-file, they are written into the document as well as the other items.

In addition to that it is now possible to highlight Shared Steps (bold) to improve visibility of Shared Steps within a list of Test Steps. Even more it can be configured whether Shared Steps shall be expanded or not. Therefore the general test configuration is used as shown in the following screenshot.

You can find the explanation of general test configuration in the user documentation on page 38.

When generating Test Reports many times, users asked to configure the values for the UI to minimize effort. For this reason we made the default values for UI fields of the following forms configurable in the w2t-configuration-file. 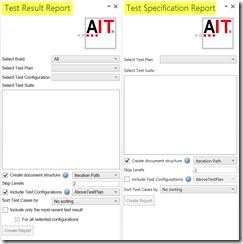 Please find the complete list of fields that can be configured in the user documentation on page 41 and 42, section “Default values for test reporting”.

Beside the major changes mentioned above, we did some minor improvements.

Beside the features, we did a ton of bugfixes. We only mention the “important” ones here.

Fixed bug that variables were not loaded for the selected WordToTFS template.

Fixed bug that Test Report showed too many configurations.

Fixed bug that new lines are added to test steps for test reporting.

Fixed error that occured when using FieldValueType=”DropDownList” for Shared Steps within fields “Assigned To” and “State”.

Fixed bug that SummaryPageTemplate were not shown on new page for TestSpecReportByQuery.

Fixed bug that images were not shown when width- or height-attribute is missing in HTML image-tag.

Fixed bug that GetWorkItemsById returned too many work items when option was enabled to get linked work items (due to recursive get).

All users that have already installed WordToTFS 4.* can use the automatic update to 4.6 to get the new features. Nevertheless the update mechanism can be manually enforced by using the update button in the WordToTFS ribbon (see the  next screenshot).

A big Thank You!

We got a lot of support from our customers in terms of funding, feedback, ideas and pre-release testing. We want to thank you for that involvement.

Currently we have not planned to release a version 4.7. Instead we are going to improve version 5.0. Hence, we recommend to upgrade to version 5.0 to get new features and fixes in the future automatically.

In case of any questions do not hesitate to contact us. We are happy to get your feedback and further improve WordToTFS in collaboration with you.