A brief description of the new features in WordToTFS 4.5

Some weeks ago we released version 4.5 of WordToTFS, our extension for MS Word that makes it even easier to handle requirements, user stories, and other work items as well as test specifications and reports in a document oriented manner. With this post we do not want to miss describing the latest features and changes that hopefully bring value to you and your daily business.

Basically the changes can be grouped into the following sections:

In the following we drill down into the details of every group mentioned before.

We start with a major change. There are some scenarios, users do not want to interact with Word using the GUI. They only want a document to be generated. By getting a step further, it might make sense to plan document creation like a scheduled task. And here we go with the console extension of WordToTFS. By this functionality, mainly the following use cases are supported:

For these use cases we introduced the following four commands that can be used with the new WordToTFS.exe that is shipped with this release of WordToTFS:

These commands basically reflect the options already known from the UI of WordToTFS to generate a Word document that contains data from the TFS database, e.g. work items or test results. Each of the commands above can be controlled by a configuration file that specifies parameters like server connection, filename, and some other basic settings. Since there are a lot of configuration options this makes the command line call less complex and allows easily versioning different versions of the configuration. The following picture shows an extract of such a config file.

Please find the complete documentation of parameters that are configurable with the config file in the WordToTFS documentation in section “Customization of the Configuration File”. Furthermore we provide a sample configuration as well as some sample calls from the command line. You can download the samples here.

All the commands are described in section “Commands” in the WordToTFS documentation.

Since WordToTFS is a extension for MS Word, which typically is not an executable, the user can enable this feature, which modifies the path-variable so that WordToTFS.exe can be called independent from the actual directory. Therefore the user can use the new settings dialog to enable the console extension feature as shown in the following screenshot: 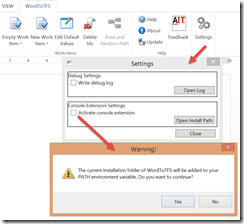 Please confirm the question with yes to modify the path variable and hence enable the console capabilities.

First we added the settings window that you have already seen in the section before. This dialog now contains the option to activate logging in WordToTFS. Furthermore you can directly open the log file from that dialog.

In addition to that we added a small button to the list of work item queries as shown in the following screenshot.

Another ui helper is that the user can see the actual file location of WordToTFS templates within the Template Manager (see next screenshot). 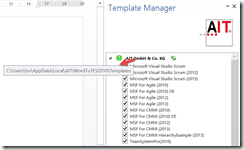 Just by hovering the cursor over the name of the desired template source, a tool tip shows the path. This makes it easier to detect where templates come from.

Under the hood we did a lot of changes regarding the HTML mechanism. It is not as simple as it look like to handle Word’s HTML representations of a table cell as well as Team Foundation Server’s HTML representation of an HTML attribute. A good sample is the usage of bullet point lists. In many cases when users use bullet point lists e.g. within a description field, Word has changed the font family at the end of the list.

Even if there might be open topics in terms of “translating” word content into an HTML code that is correctly interpreted by TFS / web access as well as Word at a later point in time, we are sure to have reached a next step of maturity.

Since WordToTFS relies on the client API of Team Foundation Server, we need some prerequisites installed. Now we added some checks regarding prerequisites. For instance the user gets notified if Team Explorer is not installed. Please find the complete list of prerequisites on the product website: http://bit.ly/EnWordToTFS

Beside the new features mentioned above, we fixed a bunch of bugs. Please find the list below:

Attention: This update is available for major release 4, only. Please find the full details of the different versions under http://bit.ly/EnWordToTFS.

Anyone who has not installed WordToTFS, yet, can download the application from the URI mentioned before for free.

For users of WordToTFS 4.x:

If you have already installed a version 4.x of WordToTFS, it automatically searches for updates regularly. Nevertheless the update mechanism can be manually enforced by using the update button in the WordToTFS ribbon (see the  next screenshot).

There is a bunch of stuff in that update and we hope you find some of the features pretty useful. However, do not hesitate giving us feedback. We’re already working on version 4.6 with some minor improvements. Since Visual Studio and TFS 2015 are not that far away, the upcoming update 4.6 of WordToTFS will probably be the last one of the major version 4. After that we will focus on supporting Visual Studio and TFS 2015. We will blog about more details on that soon.